Stefán Ragnar Höskuldsson, a native of Iceland, is principal flutist of the Metropolitan Opera Orchestra. Before winning the principal position in 2008, he served as second flutist with the orchestra. Hoskuldsson performs as a soloist and chamber musician throughout the US, Europe and South America. In 2009, he presented a solo recital as a special guest artist at the Sir James Galway International Flute master class in Lucerne, Switzerland. He attended the Royal Northern College, and while in Iceland he attended the Reykjavik College of Music. He is a regular professor at Mannes College of Music and Manhattan School of Music. This is his fourth appearance at PMF since 2011. 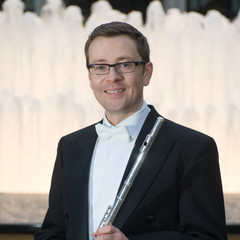